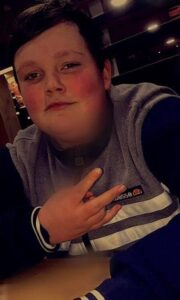 Following a vigil for a local man, fireworks were thrown and hundreds of people joined in violence in the Mayhill area. Ethan Powell who died on Monday 10th May had been watching Swansea City Championship with his grandfather when he fell ill. He was later found unconscious by his grandmother, he was flown to Morriston hospital where he died on Werdnesday from cardiac arrest / multiple organ failure.

A vigil was organised in Mayhill for the evening after his funeral where balloons were to be released. After the release of balloons, fireworks were then thrown and the crown erupted into violence which attracted more rioters.

The family of Ethan have spoken out against the rioting saying that Ethan would not have wanted this to happen. They have also requested any other vigils to be cancelled.

One resident who asked the rioters if they would move away from his house because he has a baby and small children was met with threats and then rocks thrown through the windows of his home. A resident living on the street where cars were set ablaze and rolled down the hill spoke of his fear for himself and his family, being couped up in their home but ready to instantly leave if their house caught on fire from nearby burning cars. Another resident said they were now living with worry and fear and intends to be leaving the area for the safety of her family.

The Home Secretary Priti Patel said the situation was “absolutely disgraceful”, posting on twitter saying her thoughts are with the residents affected.

Seven Swansea police officers were injured. South Wales Police say they are doing all they can to identify those responsible for the riots. Assistant Chief Constable Jenny Gilmore said the police force is confident it will identify those involved and initiate criminal proceedings against them. 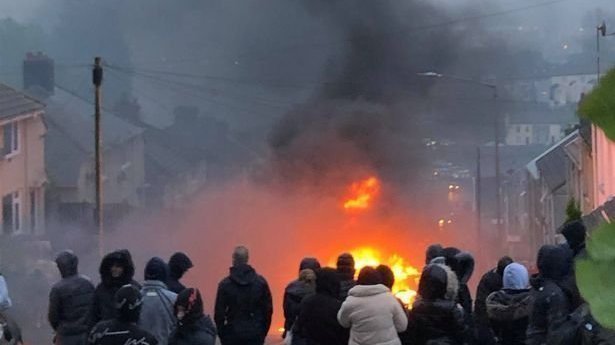 There has been a lot of criticism on social media about the police doing nothing to stop the rioting. This is in despite of the fact that a police presence was visible and attempts were made to quell the riots, however the number of police was not sufficient against the hundreds of rioters who had gathered. Some residents were still left anxious and worried as felt vulnerable despite police presence in the area.

Jenny Gilmore (Assistant Chief Constable) defended the police actions saying: “We saw disorder, violence and criminality on the streets of Mayhill, that is something that we’re not used to seeing here on the streets of south Wales. What we saw last night was disgusting behaviour, utterly unacceptable and caused a great deal of distress, alarm and fear amongst the local community. The numbers of people who were involved last night were significant, we had up to 200 people involved at some points in time. The priority of our officers is always going to be to keep people safe, everything else can be picked up later.The numbers of officers to break up a crowd of that size is far in excess of what we were able to deploy last night. So I’m confident the right decisions were made.”

Live Blog Updates:
A fundraiser has been started here: www.gofundme.com/f/may-hill-riot

A petition to install CCTV cameras has been started here: www.change.org/p/swansea-council-south-wales-police-swansea-council-install-swp-monitored-cctv-cameras-on-wuan-wen-hill

www.thesecretswansea.co.uk/ The Secret Beach Bar & Kitchen has offered free lunch delivered to any resident who had been affected by the riots.

www.windowdoctorwales.co.uk/ Has offered free assistance to any resident needing windows boarded up / repaired.

This is a live blog. Further updates may follow.