One of the UK’s most important medieval manuscripts is revealing ghosts from the past fter new research and imaging work discovered eerie faces and lines of verse which had previously been erased from history.

Dating from 1250, The Black Book of Carmarthen is the earliest surviving medieval manuscript written solely in Welsh, and contains some of the earliest references to Arthur and Merlin. The book is a collection of 9th-12th century poetry along both religious and secular lines, and draws on the traditions of the Welsh folk-heroes and legends of the Dark Ages.

However, despite its importance (the manuscript is designated ‘MS Peniarth 1’ in the National Library of Wales) and decades of scholarly research, the work of a PhD student from the University of Cambridge has illuminated tantalising new glimpses of verse from the 750-year-old book.

Myriah Williams and Professor Paul Russell from Cambridge’s Department of Anglo-Saxon, Norse and Celtic (ASNC), believe that a 16th century owner of the book, probably a man named Jaspar Gryffyth, summarily erased centuries’ worth of additional verse, doodles and marginalia which had been added to the manuscript as it changed hands throughout the years.

However, using a combination of ultraviolet light and photo editing software, the 16th century owner’s penchant for erasure has been partly reversed to reveal snatches of poetry which are previously unrecorded in the canon of Welsh verse. Currently, the texts are very fragmentary and in need of much more analysis, although they seem to be the continuation of a poem on the preceding page with a new poem added at the foot of the page.

Williams said: “It’s easy to think we know all we can know about a manuscript like the Black Book but to see these ghosts from the past brought back to life in front of our eyes has been incredibly exciting. The drawings and verse that we’re in the process of recovering demonstrate the value of giving these books another look.

“The margins of manuscripts often contain medieval and early modern reactions to the text, and these can cast light on what our ancestors thought about what they were reading. The Black Book was particularly heavily annotated before the end of the 16th century, and the recovery of erasure has much to tell us about what was already there and can change our understanding of it.”

Williams and Russell will present a lecture at The National Library of Wales today, part of a larger exhibition on the life and work of Sir John Price, one-time owner of the Black Book. There, they will detail some of their findings, stressing the importance of continued research on the manuscript.

“What we have discovered may only be the tip of the iceberg in terms of what can be discovered as imaging techniques are enhanced,” said Russell. “The manuscript is extremely valuable and incredibly important – yet there may still be so much we don’t know about it.”

The faces are visible under UV light, but not to the naked eye.
Despite its value today, the Black Book of Carmarthen (so called because of the colour of its binding) was not an elaborate production, but rather the work of a single scribe who was probably collecting and recording over a long period of his life.

This is readily visible on the manuscript pages themselves; the first pages feature a large textura script copied on alternating ruled lines, while in other parts of the manuscript – perhaps when vellum was scarce – the hand is very much smaller and the lines per page tight and many.

That the Black Book may have been something of a labour of love is also reflected in its content by the breadth of genres represented. These range from pieces of religious verse to praise poetry to story poetry.

An example of the latter is the earliest poem concerning the adventures of the legendary Arthur, which sees the famed hero seeking entrance to an unidentified court and expounding the virtues of his men in order to gain admittance.

Other heroes are praised and lamented in a lengthy text known as Englynion y Beddau, the Stanzas of the Graves, in which a narrator presents geographic lore by claiming to know the burial places of upwards of eighty warriors. Arthur makes an appearance here as well, but only insofar as to say that he cannot be found: anoeth bid bet y arthur, ‘the grave of Arthur is a wonder’.

Other famous figures also appear throughout, including Myrddin, perhaps more familiarly known by the English ‘Merlin’. There are two prophetic poems attributed to him during his ‘wild man’ phase located in the middle of the manuscript, but additionally the very first poem of the book is presented as a dialogue between him and the celebrated Welsh poet Taliesin.

Since the creation of Geoffrey of Monmouth’s Historia Regum Britanniae in the 12th century there has been a connection between Carmarthen and Merlin, and it may be no accident that the Black Book opens with this text.

Measuring approximately only 17cm by 12.5 cm, the book is made up of 54 pages of vellum (animal hide) and came to the National Library of Wales in 1904 after being bought, alongside other manuscripts, by the Library’s founder, Sir John Williams. 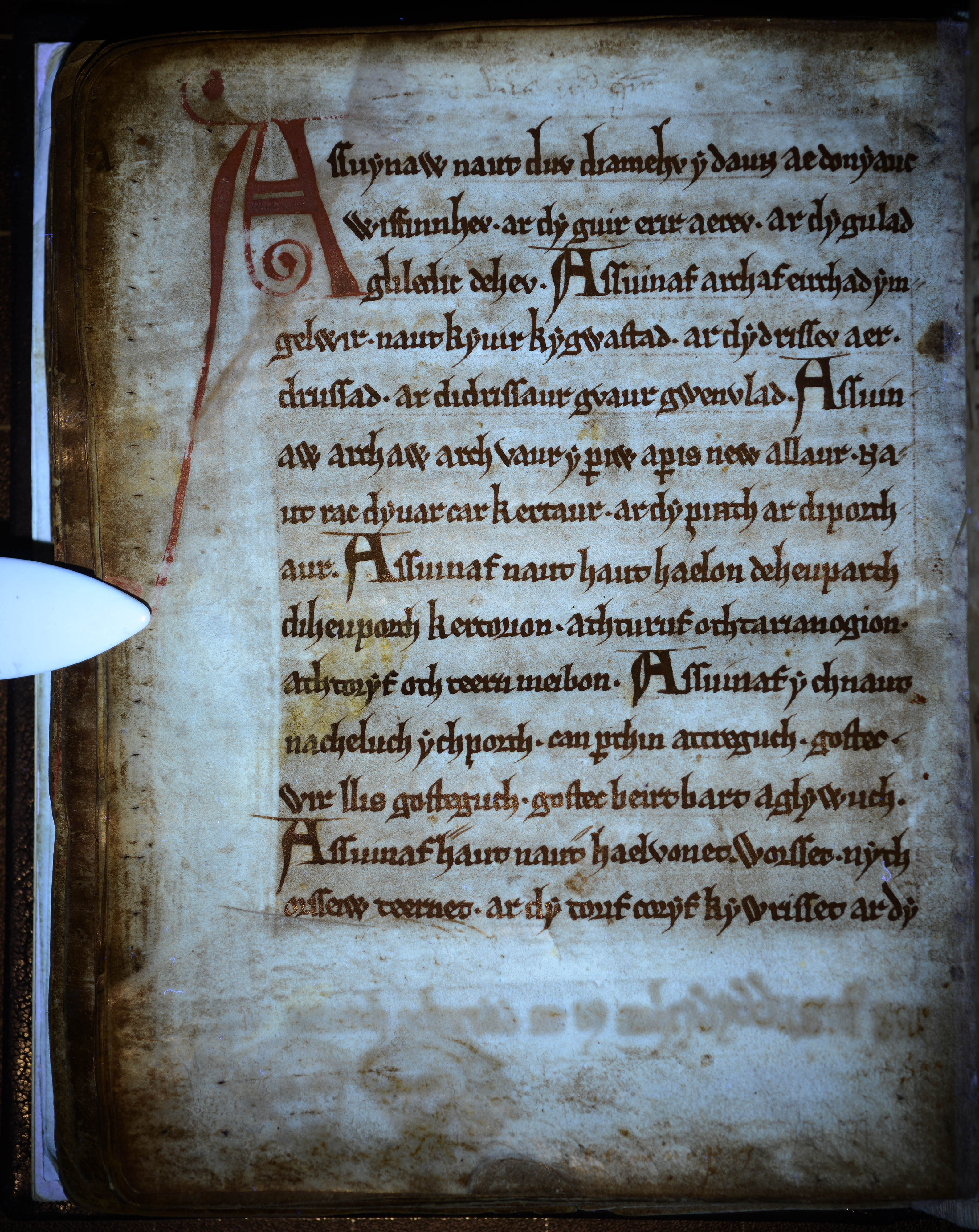 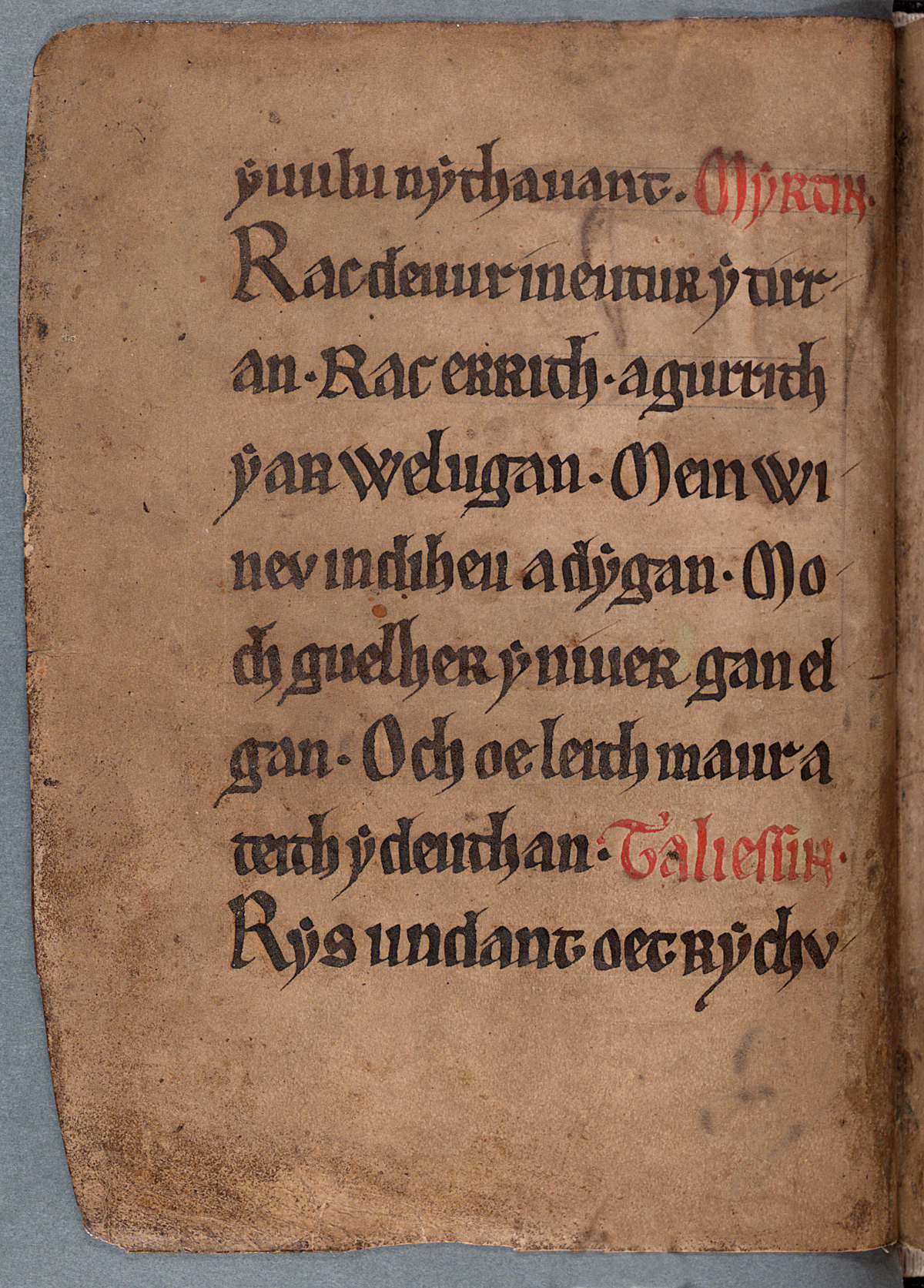